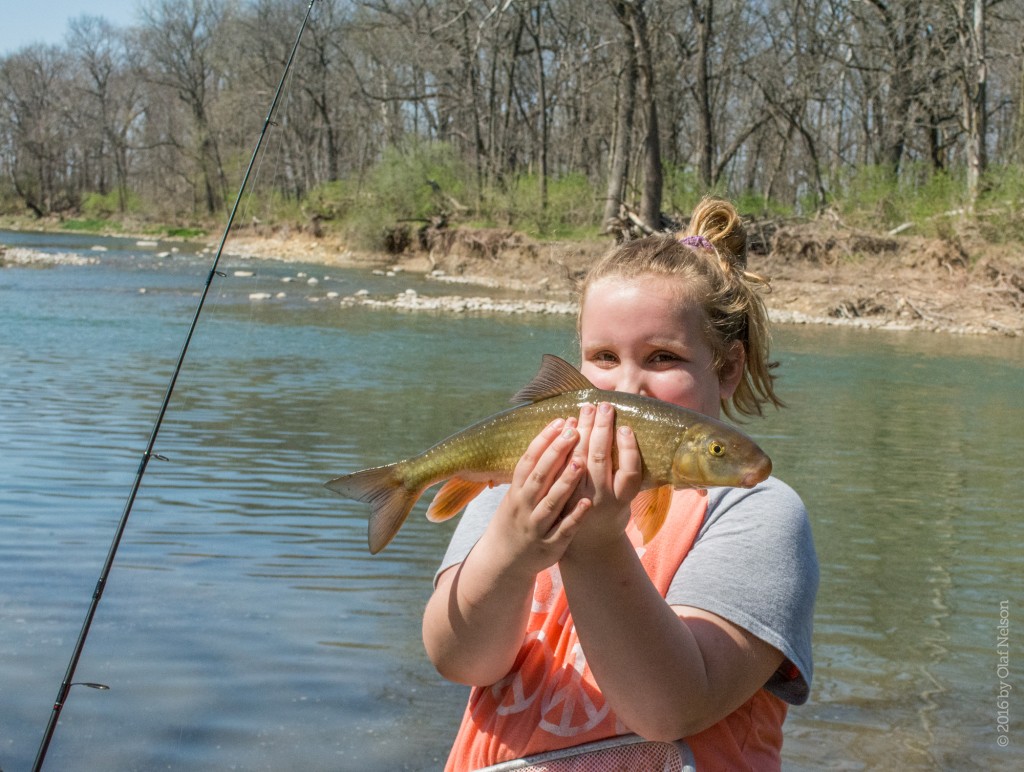 My daughters have fished as long as they’ve been able to hold a fishing pole. Both of them love it. But Iris, age 9, has developed a fishing addiction that rivals my own.

All winter we talked about the fishing we’d do when spring finally came. We talked about the species of fish found in each local stream and lake and speculated about where she’d have the best shot at catching a big carp, a pike, a gar, or a redhorse. When their birthdays came in March, the three of us went shopping and each girl got a new rod and reel, and Iris got a tackle box. A real one, with lots of space to fill. Like any dedicated angler, she brings it in the car any time there’s the slightest chance that fishing and/or lure shopping could occur.

A few weeks ago, though winter really hadn’t ended yet, Iris couldn’t take it any longer. We fished a little park pond, unsure of whether it even held any fish and, if so, what kind. The only action of the night was Iris catching the first fish of the year in our family. True to form, because this is what kids do to parents, she caught a fish that I almost never catch: a Black Crappie. Not a rare fish, not a difficult fish in general, but for some reason I rarely catch them.

A few days later it warmed up and I mounted my first fishing expedition of 2016, taking way too much confidence and gear to fish a great river. All I managed to do was lose two of my favorite spinners and all I could catch (aside from a thieving tree) were a scrawny White Bass and a small Freshwater Drum. Still, I was on the board.

After that, though, winter returned. Temps dropped (air and water), rain and then snow swelled all the creeks, and we again spent a lot of time talking about fishing and complaining about weather, making grand plans for spring. A rainy hour on the local creek brought no fish to either of us, but another quick visit to a pond got Iris a Bluegill.

Which Brings Us to Unicorn Day

Last week, the weather suddenly got it right. Sun, no more rain, blue skies. I semi-seriously considered taking the girls out of school for a day so we could go fishing somewhere better than a muddy little creek or a pond full of litter. If anything, the warm weather made us even more frustrated than the snow had, and by the end of the week we were both coming unhinged. Something had to be done. A plan was hatched.

On Sunday, April 17th, Iris and I packed a lunch, gathered our gear (well, most of it: I actually forgot my two main rods and had to use a spare that happened to be in the trunk) and headed for a river about an hour south. A river with no dams, clean, cold water, and lots of fish. A river that is home to at least 10 species of suckers, plus Longnose Gar, several catfish species, a bunch of bass and sunfish species, and dozens of cool minnows and other small fishes. Though it is a tributary of the Illinois River, it does not have any Silver or Bighead Carp.

A friend had caught a tuberculate River Redhorse, along with lots of other fish, a week or so earlier, so I was confident we’d get into some fish.

The day was perfect. Almost too warm, especially since the trees did not yet have leaves and there was little shade available. The water was absolutely clear, but still colder than I would have liked. Though a truck was parked at the spot and I feared having to share the river, no one was fishing there. We got our lines in the water, ate our lunches and waited. And waited. Nothing.

Iris took my Perfect Dipnet (I have to give Jonah’s Aquarium a plug here: that thing is awesome) and caught lots of tiny minnows I haven’t yet identified (and probably won’t), but the fishing was slow. When she did finally get a bite, it was a Smallmouth Bass that got off before she could land it. Other than the minnows, the only wildlife we saw was a turkey vulture that passed overhead. 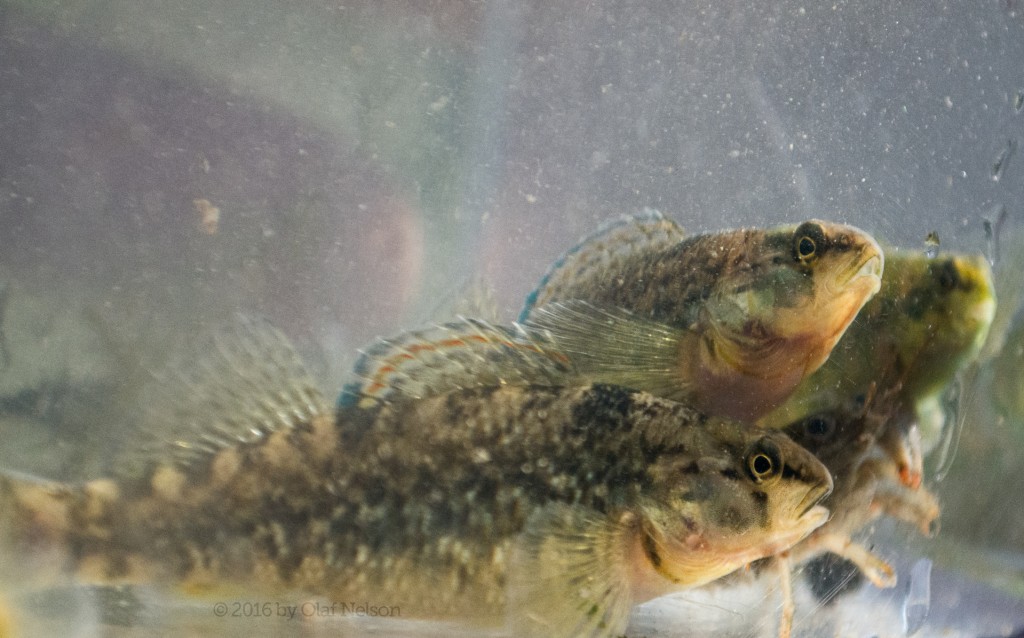 A few of the darters we netted. 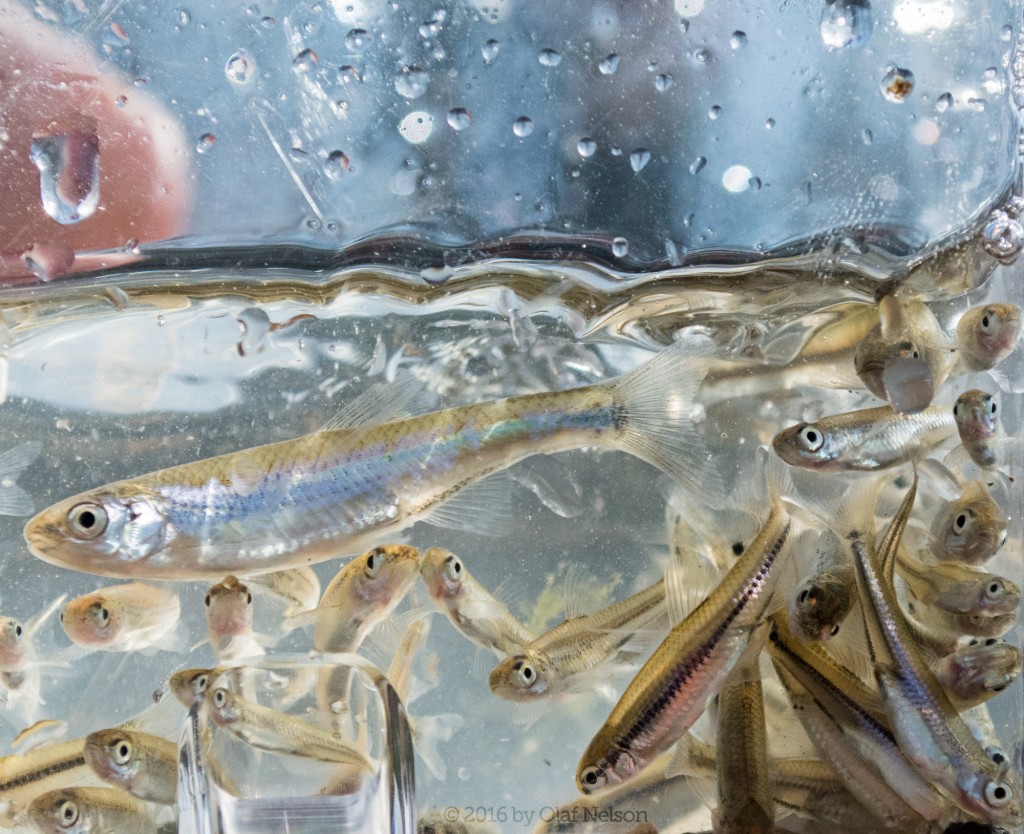 A bunch of minnows Iris netted while waiting for fish to bite. Feel free to suggest IDs in the comments, because I probably won’t get around to trying. 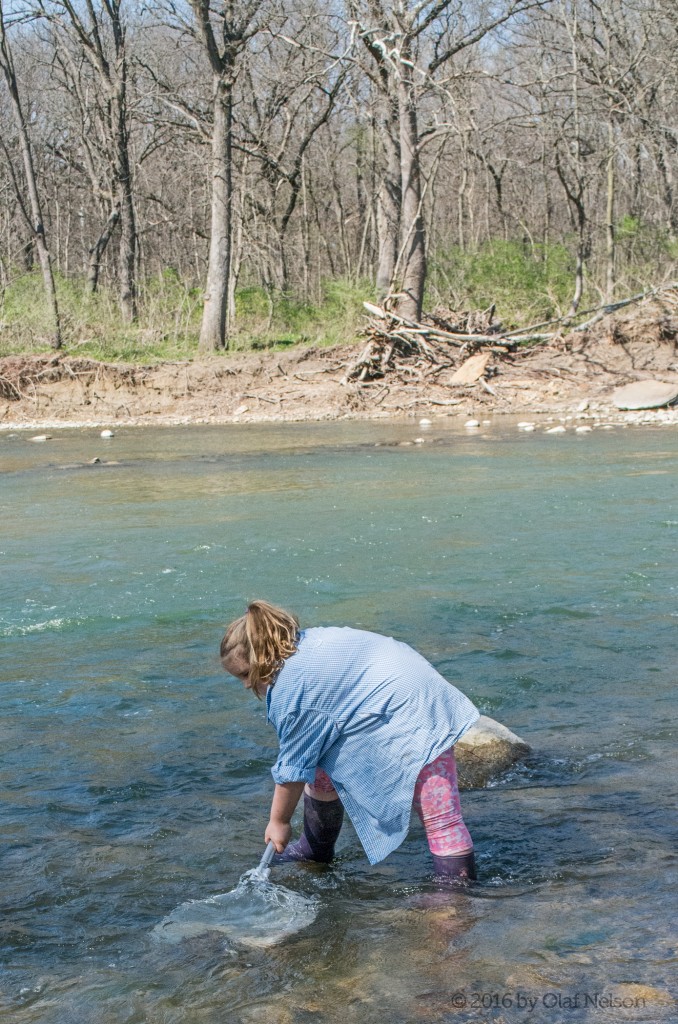 Iris in action. Lots of minnows were around, and some very small crayfish.

We only got two bites all day. Actually, I got none and Iris got two (on her new rod). The second one was so light we didn’t even know a fish was there until we decided to check the bait. She handled it perfectly, and when the fish got close I could see it was a sucker (her first) and then that it was a redhorse. The river holds 5 (and possibly all 6) of the upper-midwestern redhorses: Shorthead, River, Golden, Silver, Black (and I suspect Greater, since they’re in neighboring streams). Iris’s fish had a gray tail and the dorsal fin and mouth of a Golden or Black. We snapped some photos, then she gave it a kiss and released it. I don’t think I was actually dancing with joy, but inside my head I was.

One of the scariest things about being the fishing addicted parent of a fishing addict kid is that I will oversell the potential of a fishing trip and it won’t pan out. It’s happened enough times that I should know better. I hate seeing the disappointment on my child’s face when she’s been skunked after I essentially promised her fish. Even worse, though, is seeing her try to hide it so I won’t feel bad. Knowing that this wouldn’t be one of those days was a huge relief (for both of us, probably).

But back to the fish. It was definitely not any of the red-tailed redhorses, and it was definitely not a Silver. Since Black Redhorse was an imaginary species (as I had established though years of trying to catch one in waters where they supposedly outnumber the other redhorses by wide margins), this one had to be a Golden. Iris didn’t care so much about the species—she was just happy to catch a fish, and doubly happy to catch a redhorse.

Moments after Iris released her fish a Bald Eagle flew over, gliding in slow motion so we’d have time to recognize the emphasis it was adding to her moment of triumph. I was too blissed out to think of grabbing the camera. 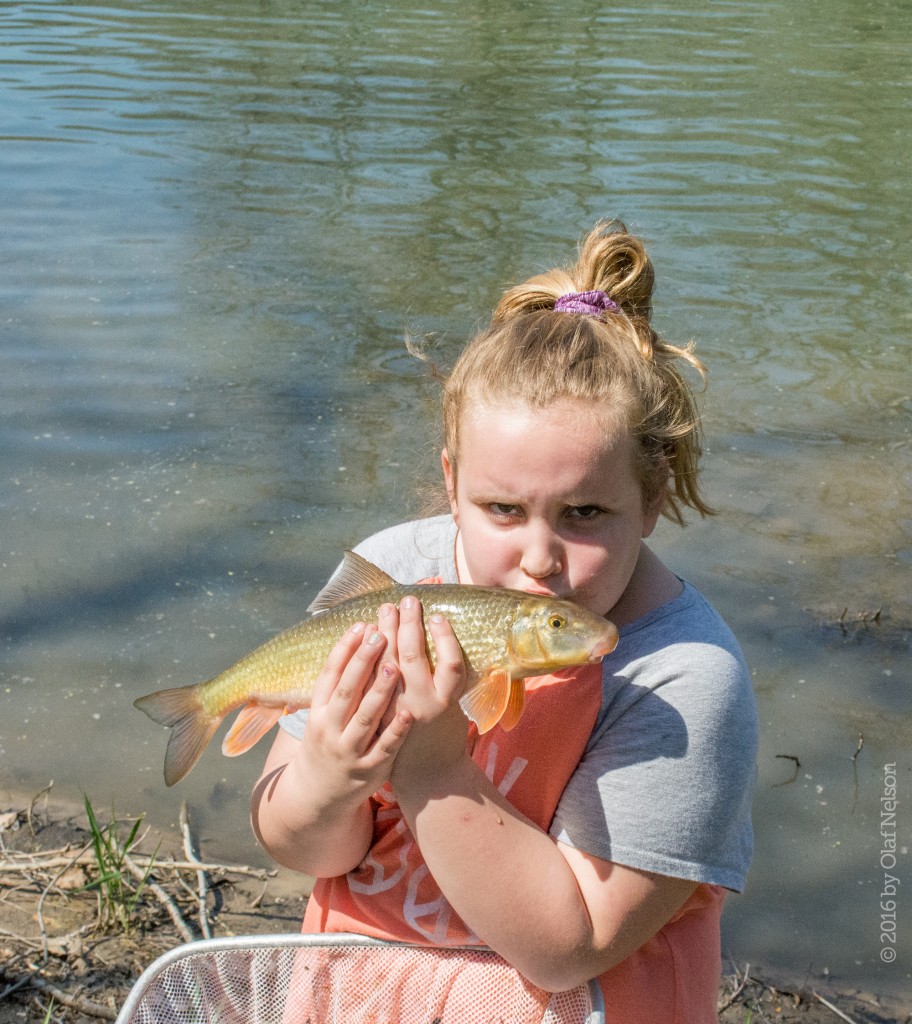 Iris kisses her redhorse goodbye before releasing it.

The rest of the day passed without a bite. We netted and photographed tons of cool minnows and crayfish, and a pair of fossil hunters gave Iris two rocks with 300+ million year old fern fossils.

We headed home content, slightly sunburned, muddy, and already making plans for our next expedition.

Say Hello to a Mythical Creature

That night I looked at the photos. Out of habit I counted scales and fin rays, and I realized something: that fish had too many scales on its lateral line to be a Golden Redhorse. A Golden will usually have around 40-43, but this one had at least 45 and maybe as many as 47, depending where you stopped counting near the tail.  I didn’t take a good shot of the pelvic fin (because the possibility that I’d need it never crossed my mind), but in the one photo that showed it mostly spread out, there appeared to be more than 9 rays. It’s a crappy photo and not included here. (For those less obsessed with this stuff, the Black Redhorse has 10 rays in one or both pelvic fins while a Golden will only have 9.)

I emailed some biologists and asked them to count scales in case I was just plain doing it wrong somehow. I didn’t tell Iris of my suspicion. The word came back that each of the biologists, including the godfather of Moxostoma science, probably the world’s foremost authority on redhorses, that Iris’s fish was, unbelievably, an adult female Black Redhorse (Moxostoma duquesnei). 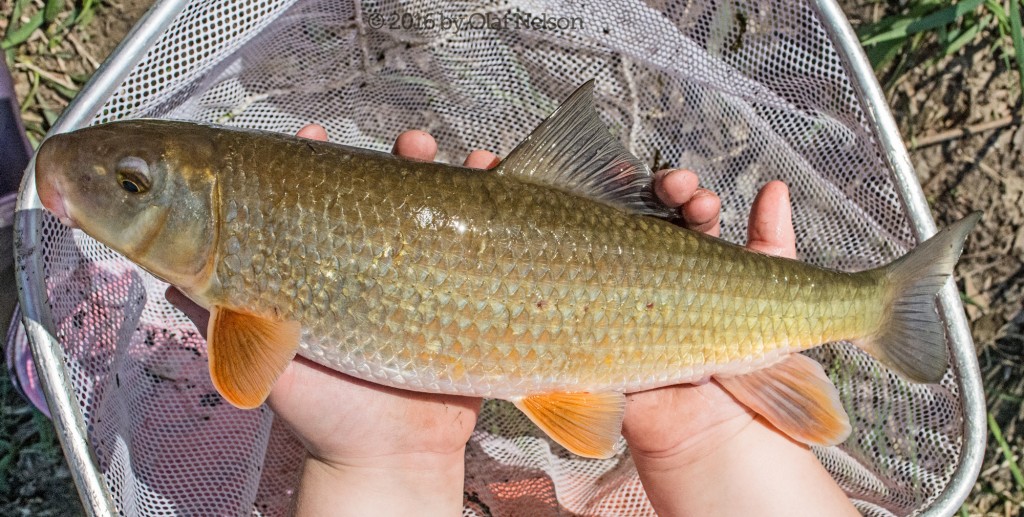 Black Redhorse (Moxostoma duquesnei) caught by Iris Nelson. IL. April 17, 2016. (The orange on the scales is the reflection of her shirt.

If she was proud before that news, I don’t know what to call her feeling now. When your dad is the guy who is so nuts about redhorses that he has a website named for their genus, and he never shuts up about them, and his redhorse ID art is all over the place, and then you go and catch the one redhorse species on his ID materials that he’s never seen in real life, that’s a power move. That gets you bonus points.

The Black Redhorse is not necessarily the most rare of Illinois’ 6 (or 7 because we also have Smallmouth Redhorse in the state, though I know little about it) species of Moxostoma, but it does seem to be caught less often than any other. I’ve personally seen more Greater Redhorses (listed as endangered in Illinois) and River Redhorses (listed as threatened) caught in this state than Black Redhorses. I don’t know exactly why, but they may be more selective feeders than the other fish in the genus.

Coincidentally, my friend Ben, who has also been seeking a Black Redhorse for years, caught his first one that same day a couple hundred miles south of us.

So, I’m now pretty sure they do exist after all, but I might not fully believe it until I catch one.

UPDATE: A little over a month later, in the same spot, I finally caught my own unicorn. Iris was a little irked that she no longer had something on her lifelist that I didn’t, but she got over it. I think she’s scheming ways to catch other species I’ve been unable to get, and I fully support her in that.

(Thanks to Konrad Schmidt, John Lyons and Robert Jenkins for confirming my scale count and ID of Iris’s fish.)

A little perspective on the relative rarity of Illinois redhorses, thanks to the Illinois Natural History Survey:

The Black Redhorse isn’t as uncommon in the collection records as 2 out of 3 red-tailed redhorses, but it’s a hell of a lot rarer than its near-twin, the Golden Redhorse. (I would guess that the Silver Redhorse is more common than this map indicates.) 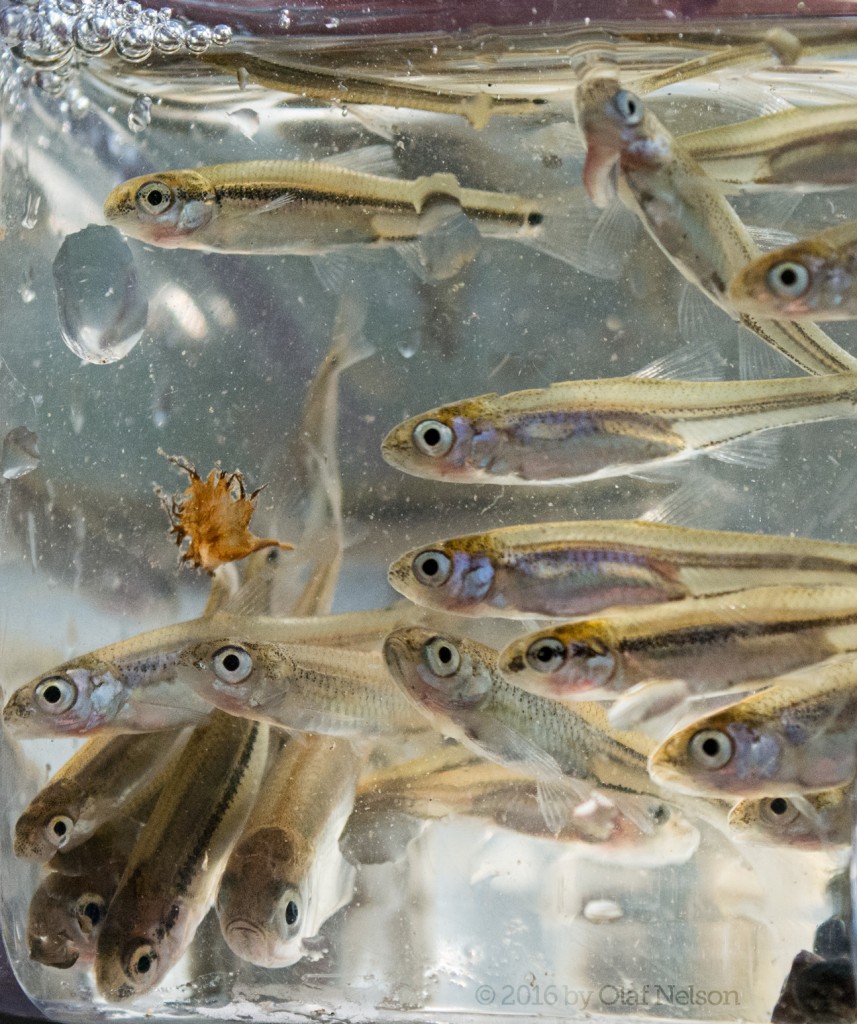 A bunch of little fish we netted while waiting for fish to bite, x-rayed by the sun. I have not yet tried to ID these fish, and probably won’t. Feel free to suggest IDs. Grundy County, IL. April 17, 2016. 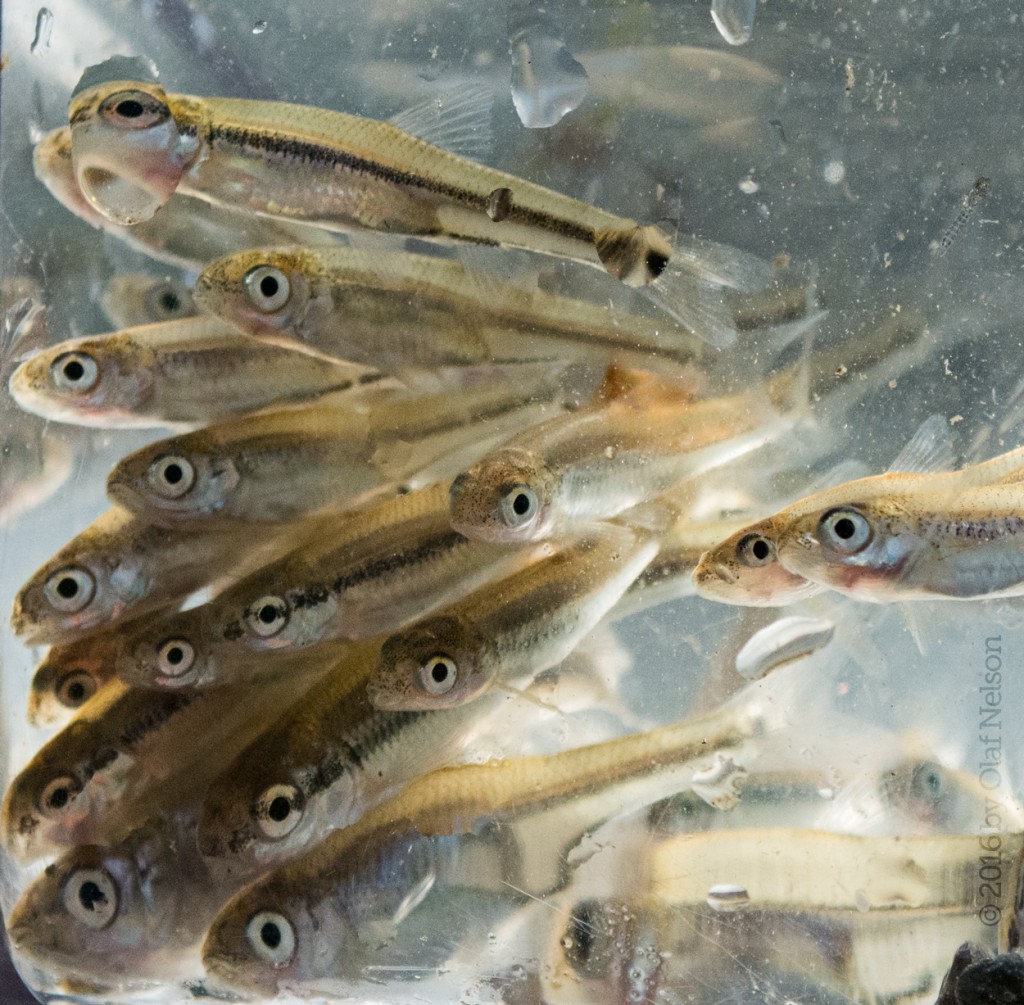 A bunch of little fish we netted. I have not yet tried to ID these fish, and probably won’t. Feel free to suggest IDs. 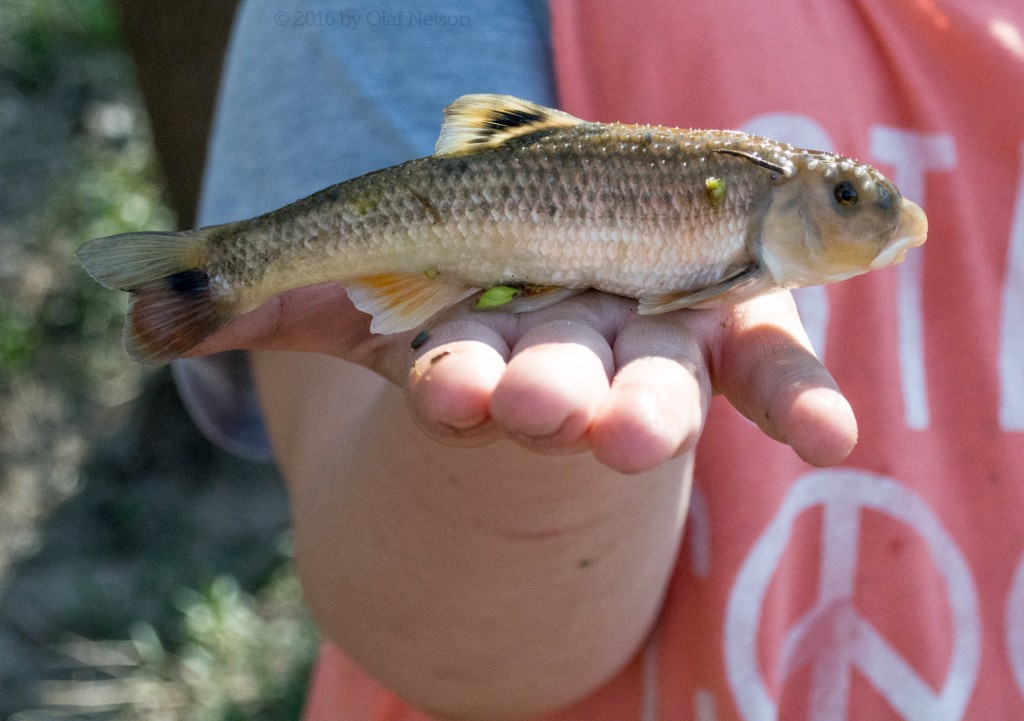 This male stoneroller (I’m not going to ID it, but it’s either Central or Largescale), sporting nuptial tubercles, was just lying on the bottom of the river. No obvious signs of trauma. It had been dead a while as it was completely stiff. Very cold water, so no decomposition. Scooped it up with the dipnet. 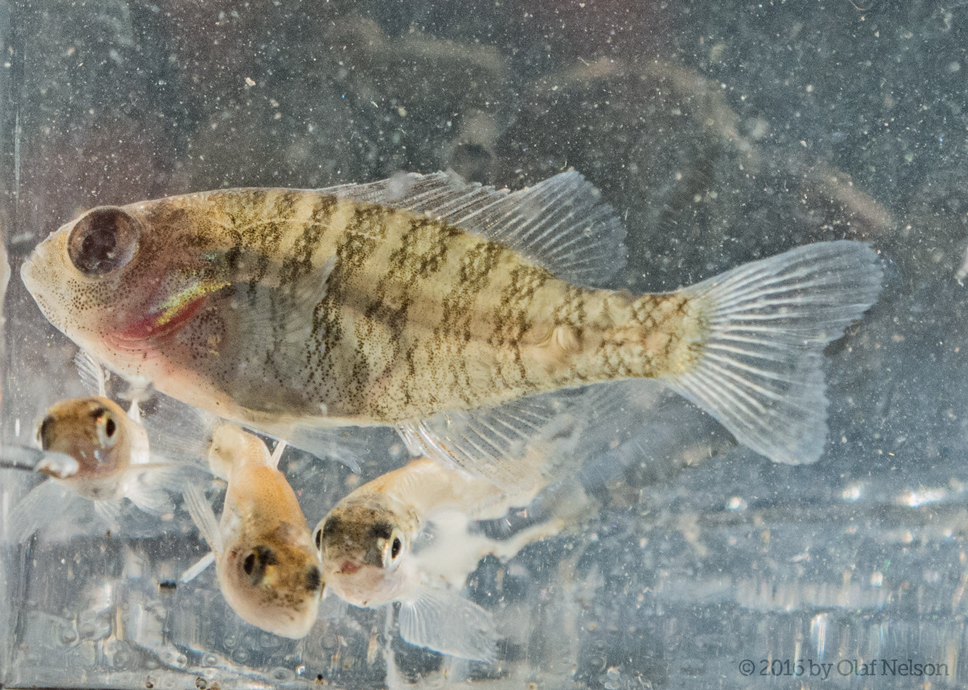 I don’t know what species it is, but this little (I assume) sunfish was the only one of its kind we netted. Length about 1″ (2.5 cm).