How often do you get to meet a new fishing buddy, discover half a dozen excellent multi-species fishing spots within an hour of home, sample the fish resident in those new locations while learning a bit about handling several different types of seines, learn a bit about photo tanks and fish photography, and see and handle dozens of new fish species, including one that’s listed as endangered in the state?

In April I had one of those days when good planning led to an experience that exceeded the daydreams leading up to it.

Get just a little distance outside Chicago and northern Illinois has far more fish species than I used to give it credit for. One of the main ways I learned this was reading Uland Thomas’s reports—and seeing his photos—from sampling trips to this region’s rivers and creeks.

Uland hoped to find and photograph tuberculate male greater redhorse (M. valenciennesi) in a creek that shall remain nameless. They are listed as endangered in Illinois, and I have never caught or seen them. Because I had mentioned that I’d like to learn a bit about seining, he invited me along. What he didn’t know was that neither of the two experienced seiners he invited would be able to make it. I don’t know if he really thought two of us could do it, especially when one was a complete novice.

Our first locations was a fantastic combination of clear water, rocks, decent gradient and the complete lack of other people. In short order, despite my rookie mistakes, we had seined a variety of beautiful shiners, darters and other minnows. In every single case these were fish species I had never seen outside of books, so it was pretty exciting. Uland did a good job patiently identifying them for me and explaining what traits to look for, but the number of species and the speed at which they were coming made it impossible for me to retain much at all.

In slightly deeper water we picked up a few large buffalo (large by my standards, not Texas standards), a tubed up golden redhorse (M. erythrurum), a beautiful smallmouth bass, a healthy looking hornyhead chub, and probably a few bluegills.

While Uland set up his photo tanks and camera equipment, I fished to an actively feeding school of buffalo (species unknown) with bits of worm. Not one bite.Then I watched the incredibly well-planned and executed photography session and tried to help out when I could.

Later we moved to another location on the same creek but a mile or two upstream. The water was clouded and to be honest I didn’t have a lot of hope that we would find the greaters. We again found a very good variety of minnows, a gorgeous stoneroller (I forget which species, and we did not photograph it) covered in tubercles, a channel cat and probably some sunfish and bass. Then we waded into a pool that was slightly deeper and had big rocks on the bottom for enhanced tripping. A number of red-tailed fish shot into sight and I missed with my end of the seine.

A few moments later, however, we got something large in the net. It was golden and had a red tail. Into a large bucket it went, and we ran through the pool again. A second large, golden, red-tailed fish in the net. A quick look at the redhorse ID cheatsheet to make sure I wasn’t mis-remembering scale counts due to excessive hope confirmed that these were both tuberculate male greater redhorse! (Confirmed later by Robert Jenkins.) We carried them to a flat area where Uland could set up his mobile photo studio and got to work.

We finished the day with stops at another location on the same creek and a visit to my favorite creek about 20 miles away, but we didn’t photograph any more fish. It was a great day: I learned a lot, saw cool fish and discovered new locations for future fishing. 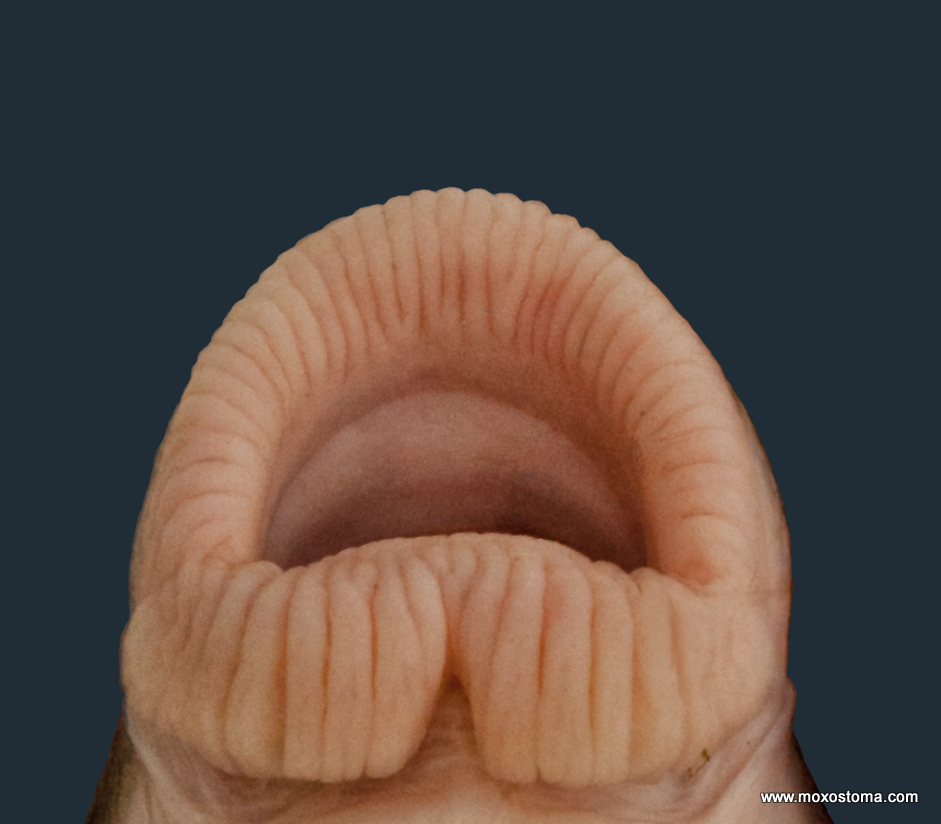 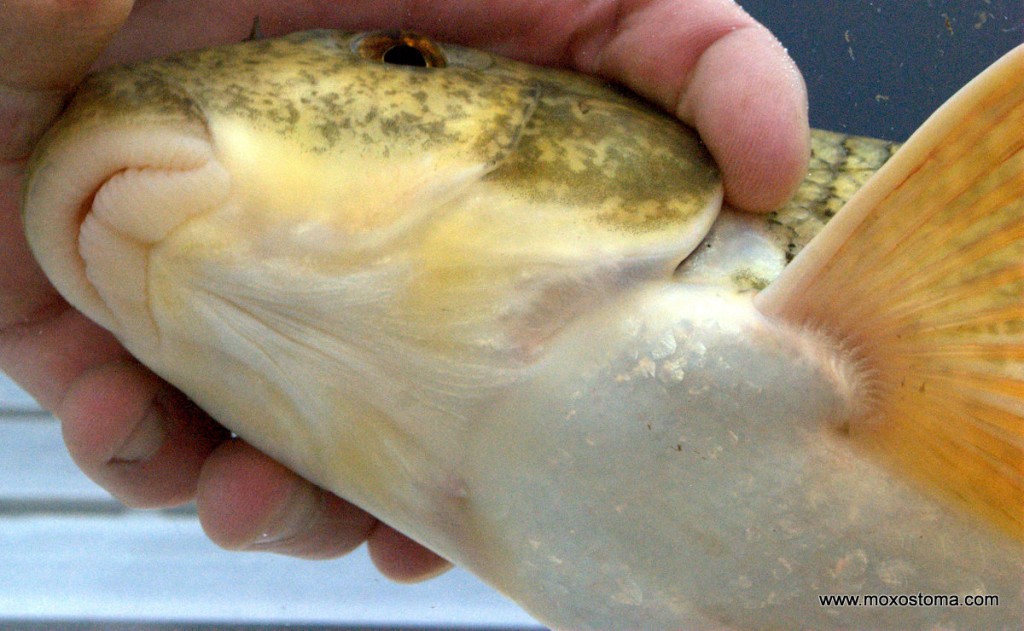 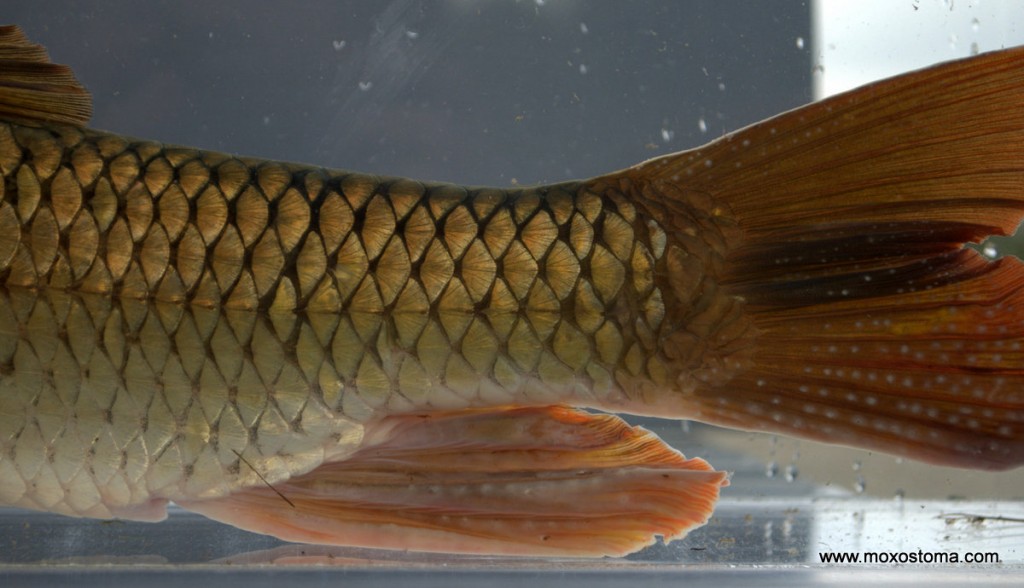 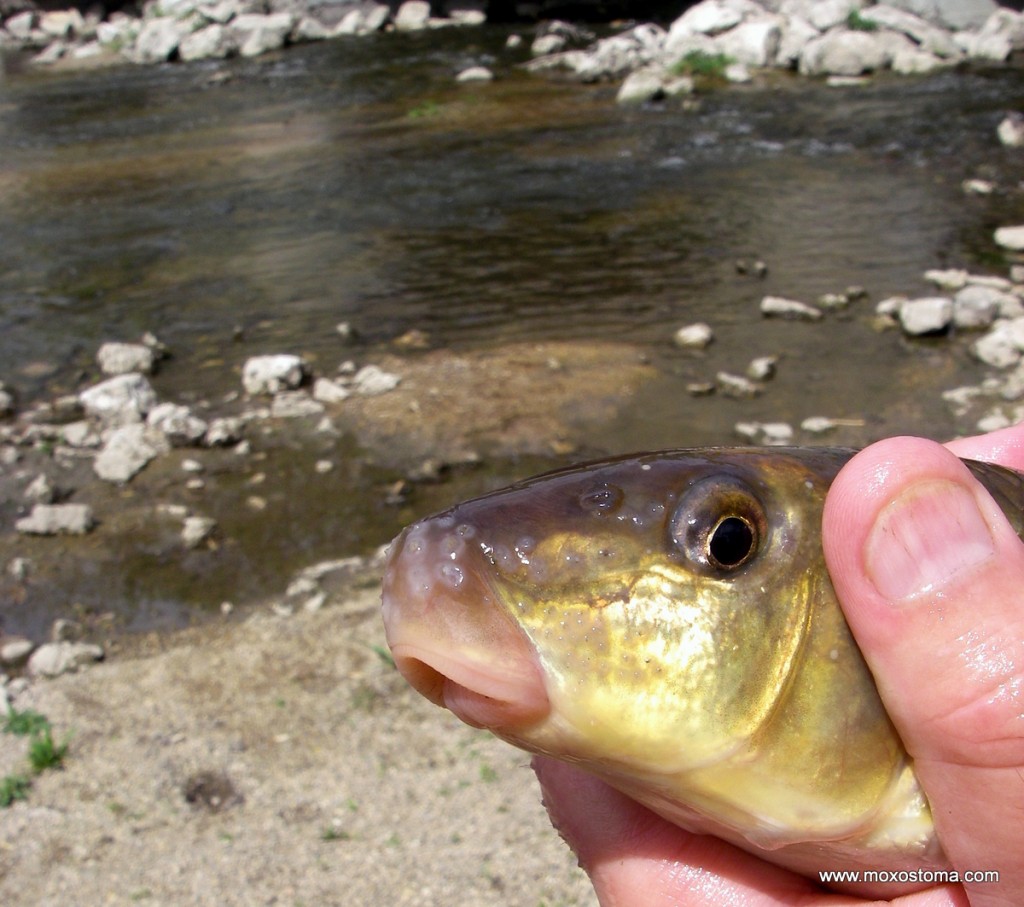 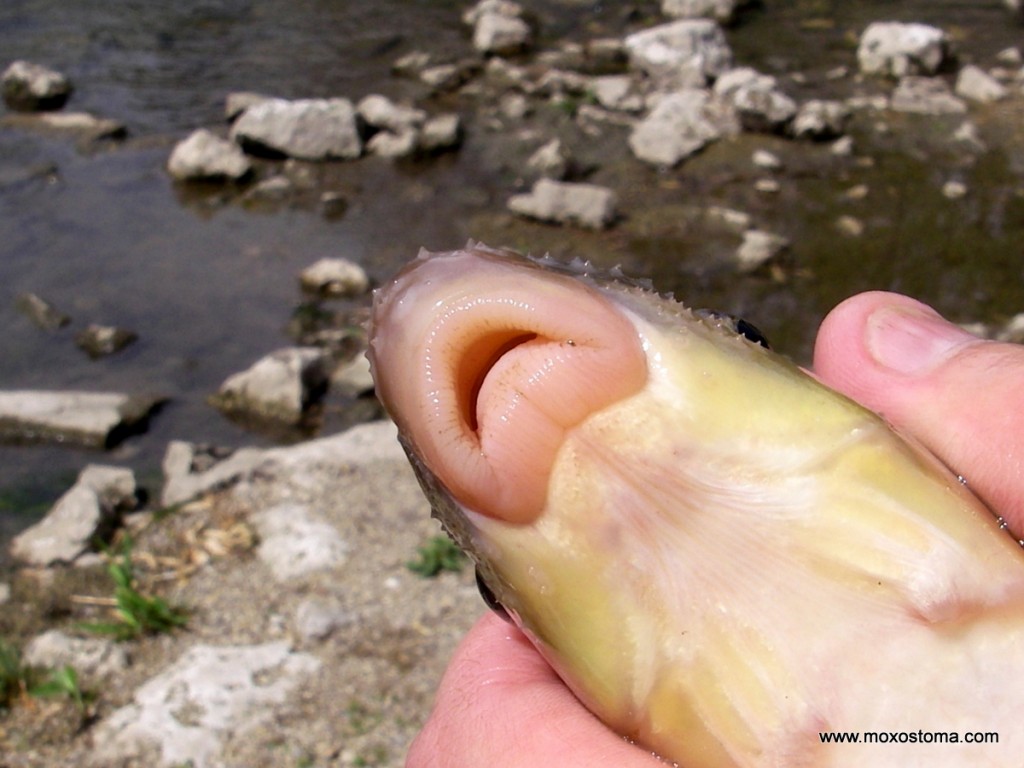 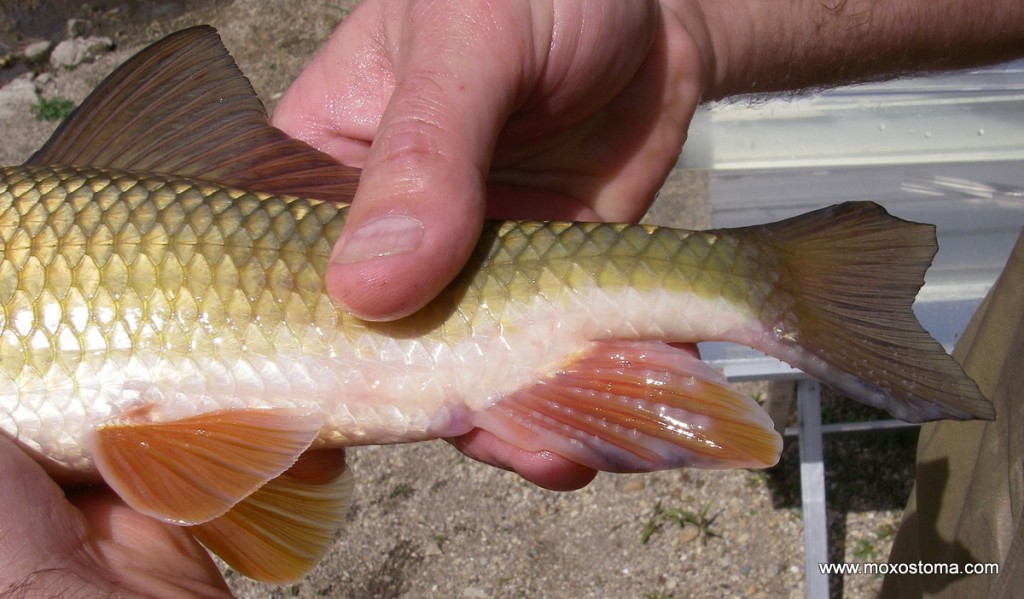 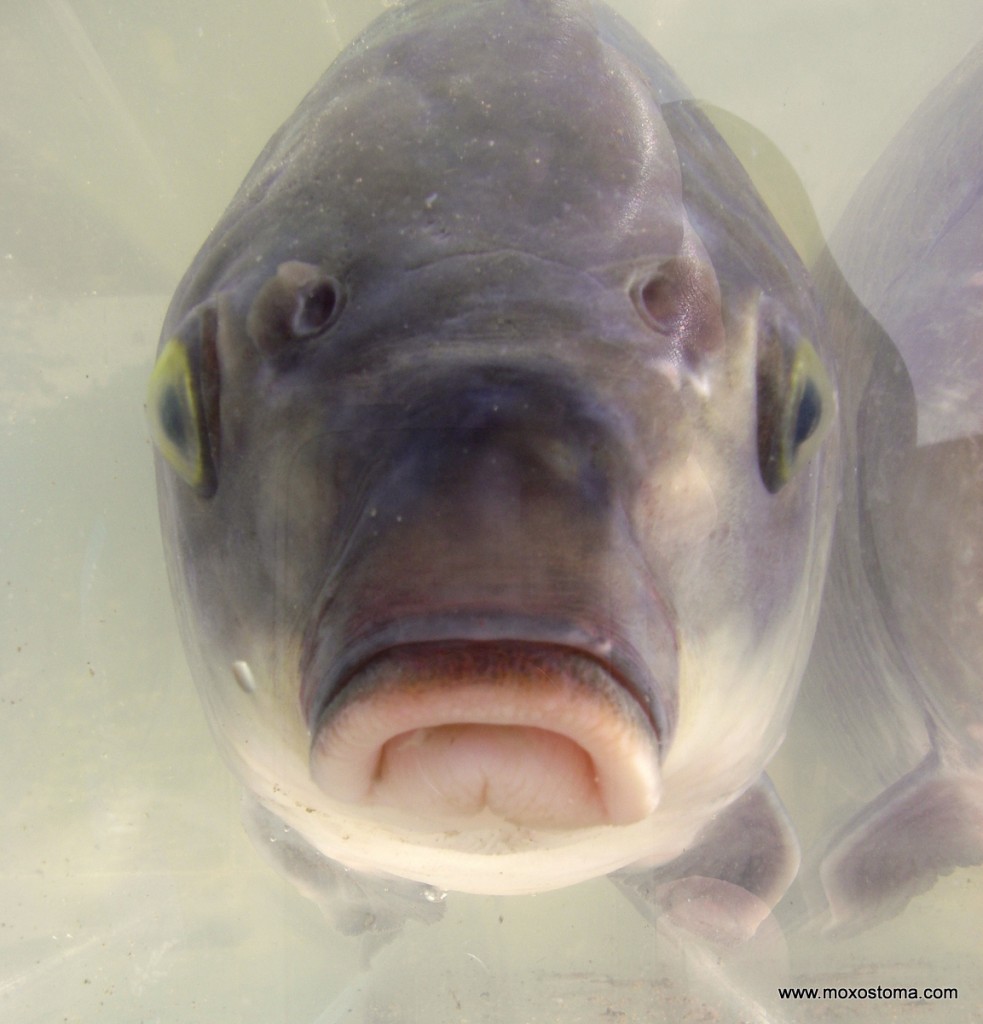 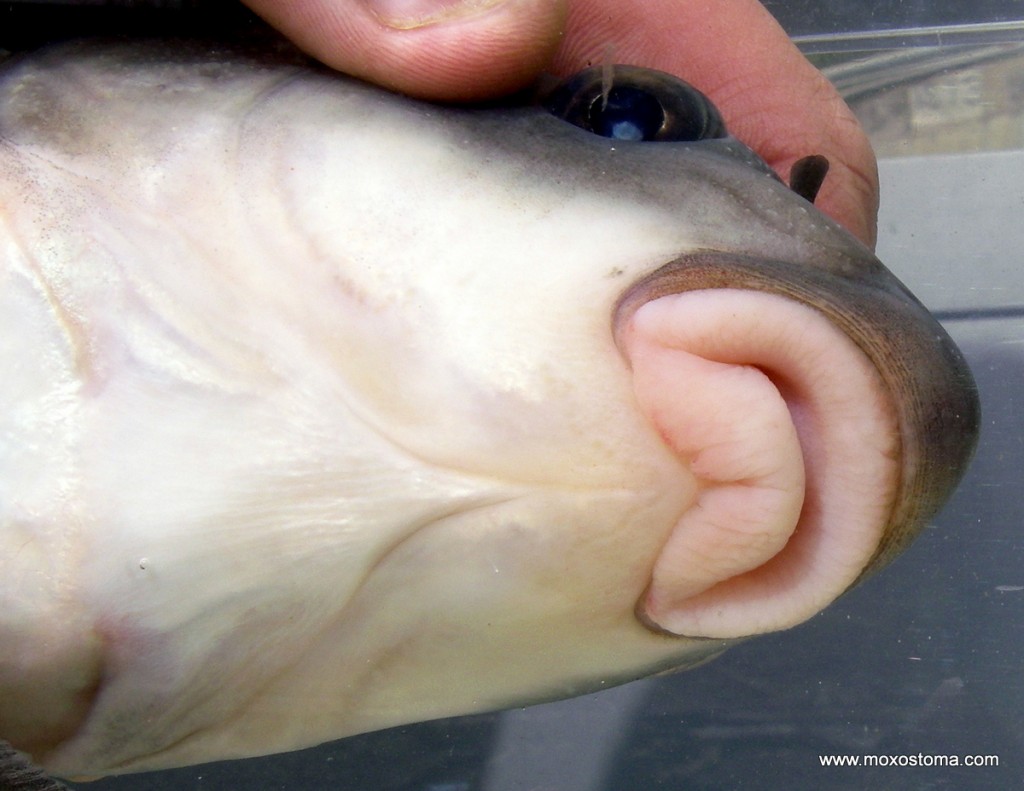