The World of Suckers (1909) and the Growth of Suckerism

Suckerism is not a circumstantial folly but an active emotion.

All hail the great unacknowledged scholar of suckers and suckerism, Lionel Josaphare (1876–?), whose work belongs on the shelf with your other fish books. It even includes valuable information missing from all those old Jordan & Evermann books and your $250 copy of Becker’s Fishes of Wisconsin. Though they covered a great many species, they apparently ignored quite a few. According to The World of Suckers, published in 1909,  some of the major sucker species are: 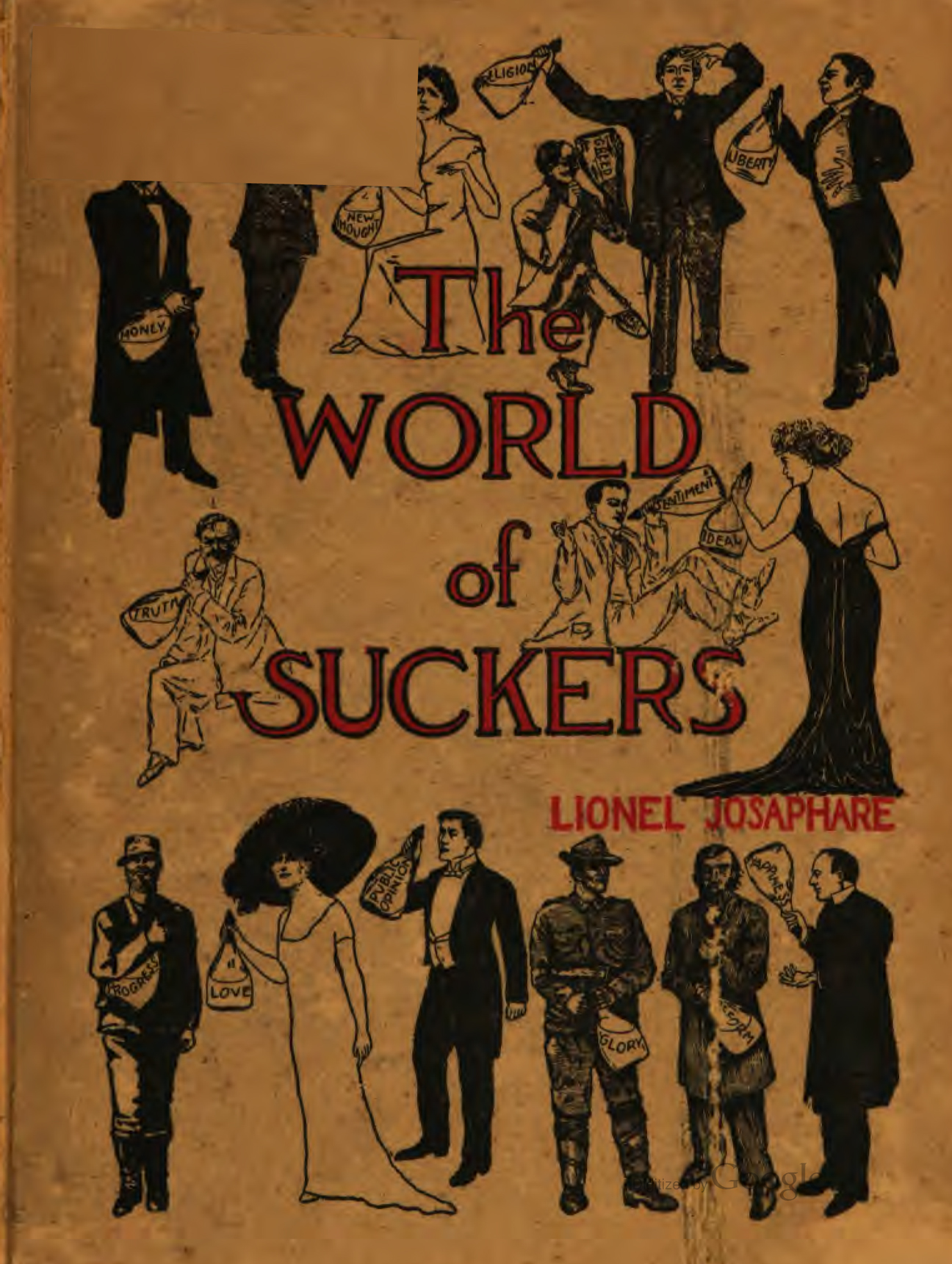 Josaphare covers everything you could possibly want to know about suckers AND suckerism.

For example, he provides a definition of the word “sucker”

[p. 1] It has been suggested that the word “sucker” arose from the name of a sweet and unsophisticated fish that skips through the waters of the Great Lakes and inflowing streams. Its aptitude for the hook was first the delight and then the ridicule of its captors, who were, perhaps like many good folks, looking for something at once delightful and ridiculous.

“Sucker,” then, on the face of it, means one who sucks obviously at an idea. Ideas are the milk of the mind, the nourishment of the soul, the food of national greatness. And even as a cow, or any female animal, unless soft hands or mouths take the milk, would corrupt its product, so would great ideas drivel over and dry without suckers.

He explains the Absolute Necessity for Suckers:

[p. 3] In order that civilization progress and partake of poetic grandeur continuously or now and then, there must be, ready and willing at all times, a predominance of joyful and high-spirited fools. These supply the hurrah and sentiment, money and labor: Make no mistake; these are not fools of the brain, but fools of the world. In themselves they are good, law-abiding, tax-paying, intelligent men; virtuous or avaricious, as they are wanted.

He also provides some Remarks on the Growth of Suckerism (p. 6). He settles a question we have long debated by revealing The Greatest Sucker of All (p. 85), and describes An Ordinary Day in the Life of a Sucker  (p. 102).

[p. 2] the sucker of today … is praised, coaxed, fondled and maltreated. He is the majority of civilization. He has been called the blood and backbone of Progress; and looks it, after the horses and wheels of prosperity have passed over him.

Suckers are kind enough to follow [their captors] of their own will. They are captivated by ideas, not captured with force.

[p. 3] the beauty … is that everybody is a sucker in one sense or another, and nobody is inflicted with the worst of it. Some get their reward in money, some in honor, some in wisdom, some in nobler inspirations and each is altogether free to choose his own milk-bottle. Oft, indeed, this bottle contains just what was expected; sometimes what is disappointing; and sometimes there is not even a nipple behind the bottle, the sucker merely having had a ninny put between his lips; which was a compliment to his imagination.

[p. 43] Extraordinary sentiment over anything is likely to make a man a sucker.

Try to read it in this little frame, or get a bigger experience by clicking the full-screen icon in the lower right corner to view it on the archive.org site.

Tagged  old books, suckers, what the hell.
Bookmark the permalink.