Mapping the Paddlefish (because someone had to do it) [updated Sep. 2016]

I needed a map showing the range of the Paddlefish (Polyodon spathula, also known as spoonbill catfish, among other things), one of North America’s most striking animals. Despite a lot of searching (online and in books), however, I couldn’t find any map that was both up-to-date and of sufficient quality. I also couldn’t find any single listing of the species’ current status in all states where it is found, nor the regulations governing if/how it can be caught (for sport or commercially). What else could I do but create the map I needed?* 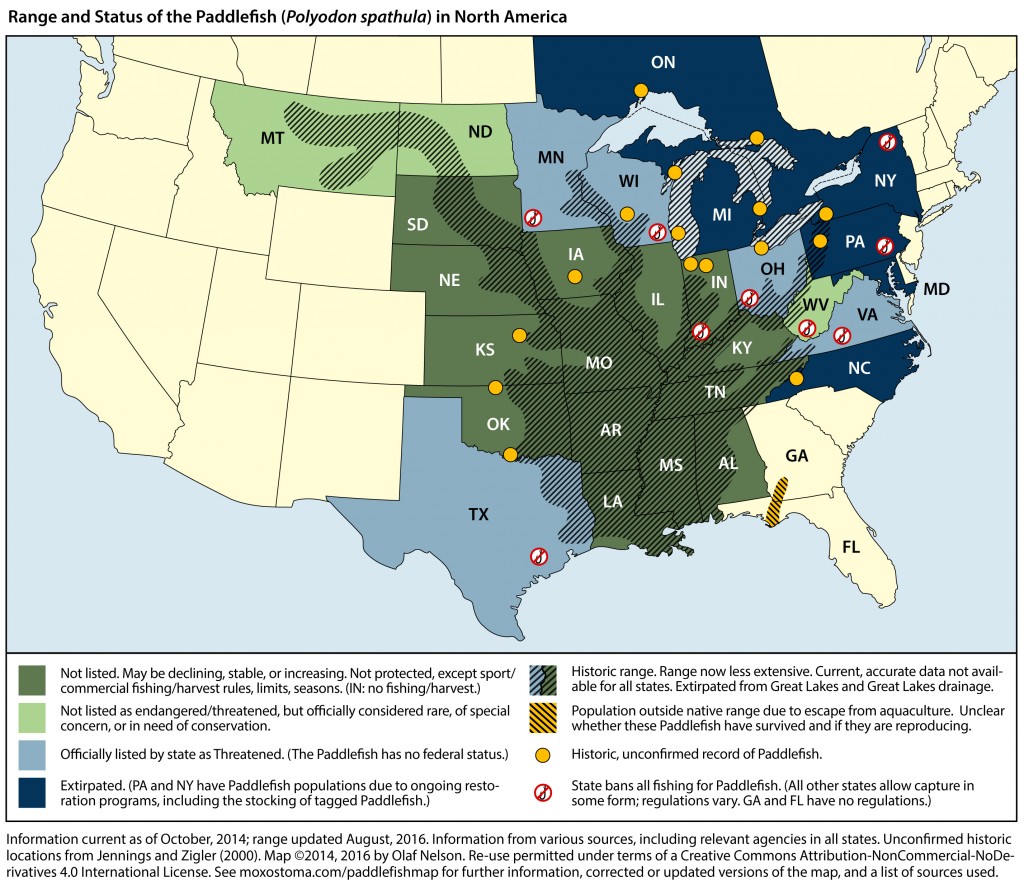 UPDATE: Thanks to information provided by Jason Schooley (Paddlefish Biologist at the Oklahoma Dept. of Wildlife Conservation Paddlefish Research Center) and Ben Neely (Kansas Department of Wildlife, Parks, and Tourism, and see the two articles I’ve added to the sources list at the end of this post), I have updated the map to include more of Kansas, Oklahoma and Missouri in the Paddlefish’s range.

The map was created to accompany a paddlefish article in the fall 2014 issue of American Currents. (Click on the map to see it larger.)

Note: As noted in the key below the map, PA and NY have paddlefish populations. They are shown in the extirpated color because the species is still officially considered extirpated by both states. When that changes, so will the map.

Corrections welcome, but only if they come with reference to sources so I can verify and keep track.

Status and distribution of the Paddlefish (Polyodon spathula) in North America by Olaf Nelson is licensed under a Creative Commons Attribution-NonCommercial-NoDerivatives 4.0 International License.
(This means you may use the map for non-commercial purposes only, provided it is not altered in any way and you credit me. A link to http://moxostoma.com/paddlefishmap would also be nice. If, for some reason, you want to use the map in something commercial, contact me. If you need it altered somehow, contact me.

Additional notes on the paddlefish:

The last time a wild paddlefish was seen in Ontario was 1917.

Paddlefish roe (eggs) make fine caviar, and as is the case with many species of sturgeon, this fact has had a negative impact on the species’ population. Tight rules now govern the harvest and sale of paddlefish roe, but poachers still take fish illegally as there is money to be made.

Read the journal of just about any early European explorer traveling up the Mississippi and you’ll find references to the paddlefish. They must have been extremely common before we fished, dammed and poisoned them to their current reduced state.

Sources consulted in the creation of the map:

*Making things like this is part of my real job (loving unloved fish is, for me anyway, not a paying gig) as a book designer (mostly the pages, but also covers). I specialize in scholarly and scientific books and journals. If you are a scholar or scientist who needs someone to design your next book or the journals you edit, please get in touch.