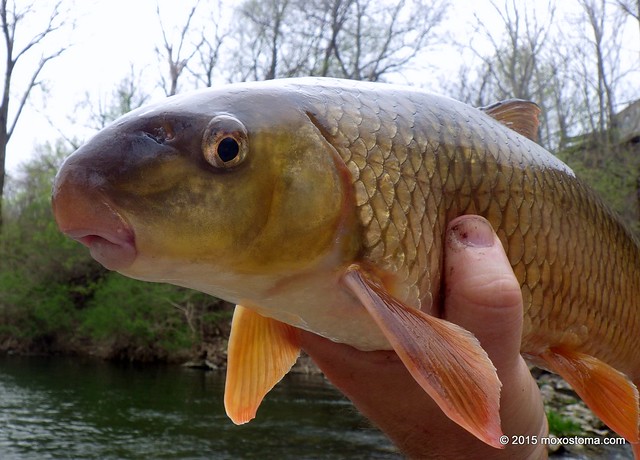 I have asked myself many times what I would do if I happened to catch a record-sized fish. I suspect most of us who fish obsessively have thought about this. There are really only two choices. You either kill it, take it to a certified scale, fill out paperwork and get the record, or you photograph the hell out of it, measure it every way you can think of, then release it and bask in the satisfaction of knowing you caught the record, even if you can’t prove it. (There are, of course, other options. The Freshwater Fishing Hall of Fame and Museum tracks catch-and-release world records, and many states have some sort of catch-and-release record system, plus it is possible to get a portable scale certified.)

I am mostly a catch-and-release fisherman, and always have been. It is partly a conservation-minded thing: I don’t want to kill animals that would (in my opinion) be better left to grow and reproduce. It’s not that I’m opposed to killing the fish, exactly, but that I usually see no reason to do so and lots of reasons not to, such as the fact that I’d rather spend my time catching more fish, not carrying them around, cleaning them, and cooking them. No one else in my home eats fish anyway.

That said, I’ve eaten many fish I’ve caught. Shortnose gar is a fantastic food fish: the meat is pure white, firm, boneless, and utterly without any of the “fishy” smell or flavor that repels some people from eating fish. It is, apparently, more like alligator meat than fish (having never eaten gator, I can’t confirm this). Cleaning gar is simple, though completely unlike cleaning any other fish. If I catch them in a river with a healthy population (and clean water), I sometimes keep a few. Mostly, though, in order to get back to fishing as quickly as possible, I release them (or they flip themselves out of my hand before I can decide).

I eat (usually smoked) any salmon and trout (except Lake Trout) I catch in the Great Lakes. Chinook Salmon, Coho Salmon, Brown Trout and Steelhead (Rainbow) Trout are not native to this region, are stocked (at great expense) by state agencies solely to be caught, and are (with a few exceptions) unable to reproduce naturally, so I feel absolutely no guilt in enjoying them.

The record fish question is another thing entirely. Is killing a healthy (and perhaps genetically important) fish to claim a record anything at all beyond satisfying the ego? Seriously: what other purpose could there be? It doesn’t really add anything beyond a few data points to scientific knowledge. It might encourage a few people to take another look at an under-appreciated species, but probably not many. The only rewards for catching a state record (assuming it’s not also a new world record Largemouth Bass or Muskellunge, which would probably lead to substantial financial gain) are certificates and patches, a mention in the state’s fishing regulations booklet, perhaps a picture in the local paper, and a story to tell until, inevitably, someone breaks the record. (I think a world record would probably be a lot simpler to decide.)

Until recently, the whole question has been nothing but a thought experiment, a distraction while waiting for a bite. Though I could easily have said, having not been faced with the decision, that I would choose to release the fish, I’ve honestly never been sure what I would do.

Fishing my favorite Illinois creek on a rainy April afternoon, I caught the fattest Shorthead Redhorse (Moxostoma macrolepidotum) I have ever seen. It was so much bigger than the Shortheads I usually catch there that even as I netted it I thought it might be a Greater Redhorse (M. valenciennesi), another red-tailed species that is rare but not unknown in the creek. As soon as the splashing stopped, though, I could see that it was an obvious Shorthead (short head, tiny mouth, concave dorsal fin, red tail). I could also see that it was a potential state record. The current Illinois state record Shorthead was caught in the Fox River on April 24, 2008. (Read more about it here.) It weighed in at 3.74 lbs. The weight of my fish, according to the scale built into my Lucid Fishing Grip (I get no compensation for mentioning them, but I have been very satisfied with the product and have used it for many different species of fish —including a hammerhead shark—in both fresh and salt water), was exactly 4 lbs. Though I could not remember whether I’d ever checked the scale’s accuracy with known weights, it seemed unlikely that it would be off by a quarter of a pound. That meant I had just caught the new state record and had a decision to make. 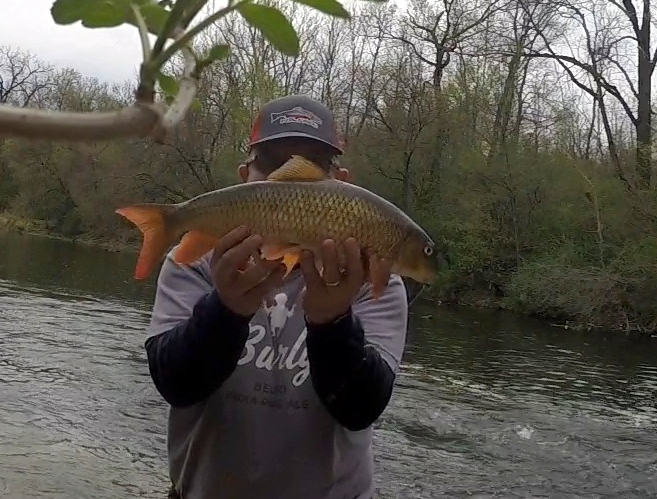 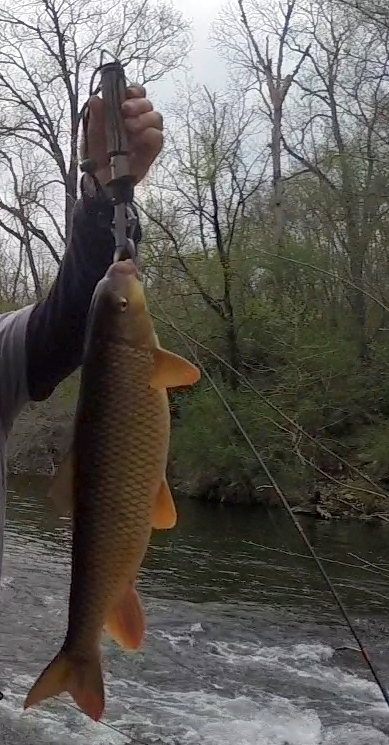 I have a well-documented addiction to fishing. It’s extremely difficult for me to stop. I’ve been late for a lot of dinners and I’ve been lost in unfamiliar forests after sunset. More often than not when I ignore the (at least) half of my rational mind telling me it is time to stop, I don’t catch much. Maybe it’s that I rush, knowing I should get going, and my presentation isn’t good. Maybe adrenaline causes minute muscle tremors that are transmitted through rod and line. Maybe my aura gets stormy and scares the fish. I don’t know. Still, despite knowing I’m probably not wise to keep trying, I often keep fishing.

The problem in this case is that fish seem to lose weight after being caught. I have seen several explanations, though no scientific investigations. If the fish is dead, then loss of water would be an obvious cause of weight loss. Even if kept alive, however, a stressed fish may regurgitate stomach contents and/or excrete fluid and solid wastes. In a livewell or net the fish is also not taking in any food. Maybe their ability to regulate the body’s water content is compromised by stress, causing water loss. Guess what I did. I kept fishing. For several hours. The redhorse remained alive in my landing net in the creek, but it couldn’t move around much. I transferred it to a plastic tub full of creek water for the drive home, and it was still alive when, maybe 5 hours later, I finally found a store that was open on Sunday afternoon and had a certified scale. The official weight: 3.73 lbs. That’s right: .01 pounds under the current record. I later tested my scale and found it to be very accurate, so unless I read it wrong at the creek, my fish had been a record and had lost a substantial amount of weight.

My ego led me to kill a fish, so I had to make sure that it was not totally in vain (and vanity). I cleaned the fish, getting a decent amount of clean, firm meat and a ton of ultra-tiny eggs. I chopped the meat (not wanting to get out the grinder for such a small job), mixed in simple seasonings, cracker crumbs and egg, coated with panko crumbs, and fried. It was delicious, and the hot oil melted any small bones that remained. 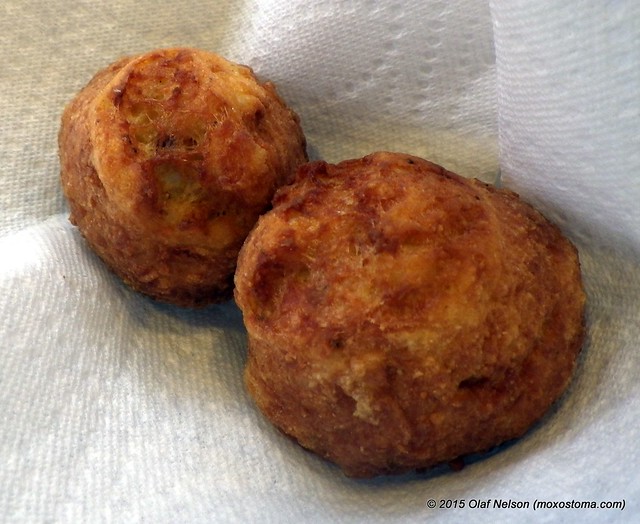 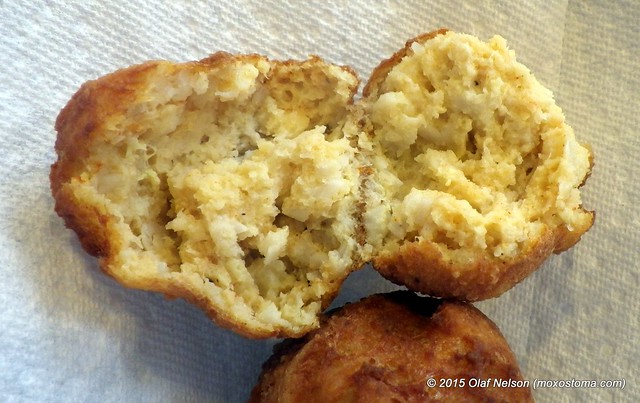 I fried one skein of eggs in basically the same way, but the tiny eggs got hard and it was a lot like eating deep-fried sand. The rest of the eggs I made into caviar. Their size meant that there was no satisfying pop possible (as you’d get with regular caviar), but the fishy, salty taste was quite good. 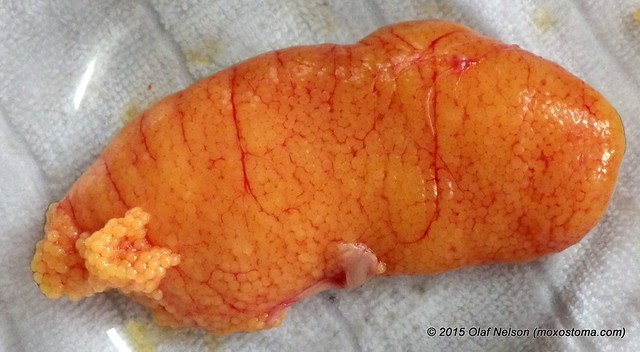 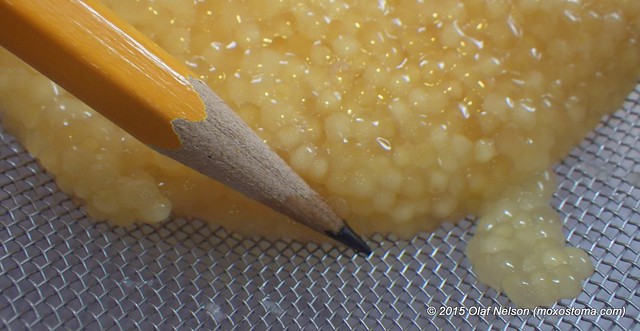 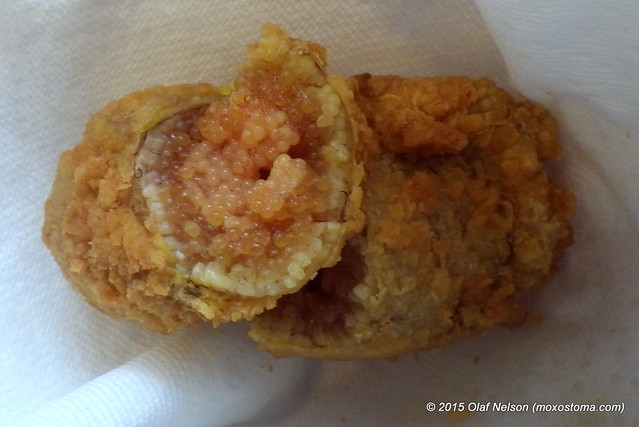 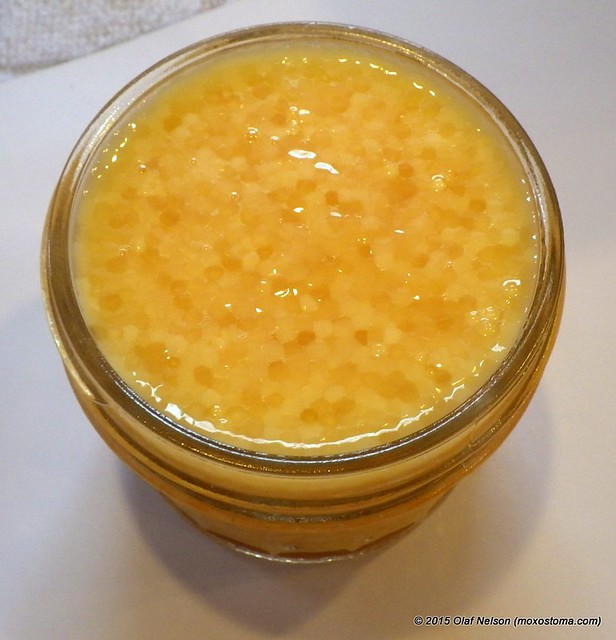 One note on homemade caviar: if you make some and then forget it’s in the fridge for a few months, and if when you open it to share with a friend he says something like “I didn’t expect that sort of sweet, fruity taste,” then you should probably put in more salt next time AND eat it sooner.

What will I do the next time I catch a record fish?

To be honest, I don’t know. Stay tuned.