Multi-species angler Ben Cantrell managed to catch a couple of juvenile quillbacks (Carpiodes cyprinus) recently (late March, 2013), and since I have never seen any this young—in person or in photos this clear—I asked if he would let me post them here.

(Edit: Ben has since written up this story on his own blog, along with other fishing successes. Check it out for some great fish and photos: http://bencantrellfish.blogspot.com/) 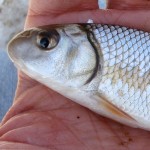 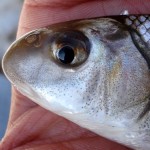 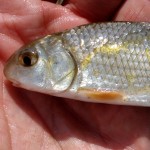 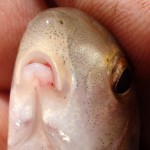 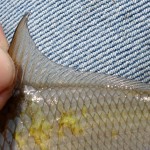 These were caught in an area of no visible flow in a side channel or small creek connected to the Wisconsin River. Ben estimates the water was 18 inches deep with a temperature of about 40°F.

Ben’s description of his tactics:

There was a massive school of shiners in the channel, so thick it was difficult to see the bottom.  Every now and then I saw a flash of silver as slightly larger fish on the bottom turned on their sides, which I assumed was feeding behavior.  I was fishing with a Tanago new half moon hook and a tiny bit of nightcrawler.  The shiners would attack the bait before it could reach the bottom, so I put a bigger piece of crawler on (a piece smaller than a pencil eraser).  This allowed the bait to get past the shiners and reach the bottom.  I left the line slack and every 5 seconds gave it a pop to see if a fish was on.  This produced 2 of those juvenile quillbacks in about 15 minutes.  They were both definitely fair hooked in the mouth.  I checked the lower lip for a nipple and did not see one in order to rule out highfin or river carpsuckers.  I suppose it’s possible that juveniles of those species do not have the nipple on their lips.  However, quillback strongly outnumber the other 2 species in the lower WI River, so I’m sticking with quillback.

In fact it is possible for the nipple to be absent from juveniles of the other two species: Etnier and Starnes (The Fishes of Tennessee, 1993, pp. 264-265, full text available online) say of the quillback “This is the only carpsucker that lacks the tiny, nipple-like projection on the lower jaw, but young carpsuckers of other species may have this process absent or weakly developed, and are very difficult to identify.” These are quillbacks, however, based on scale counts. According to Becker (The Fishes of Wisconsin, p. 630, full text available online) the quillback has 36-40 lateral line scales, while the highfin (p. 638) has 33-35 and the river (p. 634) has 34-36. There are about 39 on both of Ben’s fish. There is always the possibility that young specimens of Carpiodes can be confused with young specimens of Ictiobus. Anal fin ray counts can help distinguish the two, but are not available in these photos. Based on their bright silver coloration and general appearance, and on the shape of the suboperculum (symmetrical in Ictiobus, assymetrical in Carpiodes and Ben’s fish), I don’t think there is any need to worry about these being young buffalo.

Ben estimates (based on a measurement of his hand) that these fish were about 5.8 inches long. Given the vagaries of measurement in photos, I’m arbitrarily considering them somewhere between 5.25 and 6 inches (roughly 130 to 150 mm). Becker’s growth chart shows southern Wisconsin young-of-year quillbacks, hatched in May or June, reaching an average total length of 41 mm by the middle of July and 100-110 mm by the middle of September. He writes that “in the lower Wisconsin River, age-I quillbacks are 144 (134-155) mm TL by mid-July; age-II fish average 202 mm.” (p. 632) If Ben’s fish were 130-150 mm long, and if I’m reading the data correctly, they would be products of 2012’s spawn.

Now, let me get to the point. I love fish and fish science, but I am first and foremost a fisherman. Even worse, I’m a fisherman who chooses to pursue suckers. I have to point out the most remarkable thing about Ben’s story:

“This produced 2 of those juvenile quillbacks in about 15 minutes.”

Those who do not target quillbacks may not know that they are generally very difficult to catch fairly because of their extreme skittishness, their preference for small foods (see below), and their ability to suck in and spit out a bait faster than the vibration can travel up the line to the angler’s hand. By the time the signal has traveled from the fish to the hand, then from the hand to the brain and back to the hand as an order to react, the quillback has already expelled the bait. Because of this, quillbacks are frequently snagged outside the mouth when the angler attempts to set the hook. I know fishermen of undisputed skill and expertise who have tried for years, without success, to fair hook a single quillback despite snagging many. That Ben managed two of them in 15 minutes is both remarkable and probably annoying to some others.*

On the subject of quillbacks’ culinary habits Becker writes (p. 632):

The quillback feeds freely on debris in the bottom ooze, on plant materials, and on insect larvae. According to Harrison (1950), only small amounts of indentifiable material are found in the visceral contents: 86% undeterminable debris, 12% algae, and 2% insect remains, with a trace of other invertebrates. Very small tendipedids, sometimes occurring by the thousands, were the only insects found intact in the digestive systems examined. Other insects were represented by larvae cases, detached legs, and wings. In southeastern Wisconsin (Cahn 1927), the quillback’s food consisted of fragments of aquatic vegetation and algae, occasional Chironomus larvae, and a variety of snails (Planorbis, Physa), and small clams.

Thanks to Ben for the photos and information, and for making the rest of us feel like chumps.

The following video shows a feeding quillback (starting at about 2:40, after lots of gar, cats and others) in an aquarium at the National Mississippi River Museum and Aquarium in Dubuque, IA. I keep meaning to go back and get some better quality footage. (http://youtu.be/iuVh2BWmUoQ)

*(Due entirely to dumb luck, and not at all to skill or knowledge, the first sucker I ever caught was a quillback. That was several years ago and despite seeing thousands of them since, and trying every trick in my arsenal, I have never hooked another one.)